Fandom and Racism: Is is racist to not ship or like characters of color?

[Originally Posted on The Fangirl blog on October 2013] 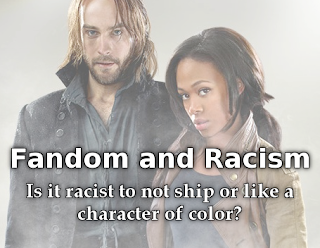 Recently, I joined the Sleepy Hollow fandom, and I’m loving it a lot. However, someone pointed out that they recently saw a post on the Sleepy Hollow tag that said the “only reason to not ship Ichabod and Abbie is racism.”
I do NOT believe not liking or shipping a character of color, in and of itself, is racist. However, I do think it’s important to talk about where this idea comes from because it is indirectly pointing out a very real issue in fandoms and media in general.
This sentiment is nothing new, and as much as it may seem to come out of the left-field, it has a very real, very palpable basis. Not because fans are racist, but because of the way people of color are treated in popular media. And how that inequitable treatment and lack of representation can be echoed in fandom.
Similar accusations have been leveled against fans, in the True Blood fandom, who didn’t like the character, Tara. In the Iron Man/Avengers fandom there have been accusations of unequal treatment of the Tony/Rhodey ship. I can even remember heated debates over similar issues in both the Heroes and Angel fandoms.
I used to roll my eyes when I saw these kinds of accusations fly around in the past. They didn’t make sense to me because I, like many other fans, didn’t like or ship these characters either. I knew that my choice to ship or not wasn’t based on race, but rather how I felt about the character themselves. I was left, like others in fandom, scratching my head.
Then, I joined the Twilight fandom. Where the most popular slash pairing was not between the two male leads of the series, Edward Cullen and Jacob Black, but rather Edward Cullen and his vampire sibling Jasper Whitlock. Two white guys.
The popularity of the Edward/Jasper pairing, confused me, given that Jasper had a smaller role, and very few scenes of interaction with Edward when compared to Jacob. It was especially inexplicable to me when the most popular slash ship I had seen in other fandoms were almost always between the two male leads (especially so if they were romantic rivals). The only difference that I could see between all those popular slash ships and Edward/Jacob was that it is a multicultural relationship.

I have a lot of friends who are Ed/Jasper shippers, who I know are not racist, but I knew there was something else at work, and I had to figure it out. So instead of judging them, I decided to listen to what they had to say about why they liked the ship, but more importantly why they didn’t like or relate to Jacob.
Once I set aside my own personal feelings (and anger), I realized the fault didn’t lie with fans, but rather with the source material. Many of the Twilight fans don’t like Jacob Black, don’t see him as a desirable, or relatable character because Stephen Meyer didn’t write him to be one.
When you look at the Twilight series, all of the Quileute characters are underdeveloped, undesirable, and unsympathetic. Their actions often bordered on racist stereotypes. From Jacob’s attempted sexual assault on Bella to Paul’s violent temper that resulting in him shifting into wolf form and attempting to attack Bella. Even Leah’s “harpy” stand-offish behavior toward Bella, all set them in opposition of Bella, the lead character and the stand-in for the reader. They are alien to her human nature, but not in the sparkly, desirable way the vampires are, but a violent, animalistic threat to her very safety. I mean, Jesus, Meyer even made them smell bad. WTF?
While other media aren’t as overtly racist in their portrayals of people of color, often their treatment of characters of color is no less problematic. In other words, fans might be more inclined to love and ship characters of color if there were MORE of them. If people of color were allowed to be complex, layered, and most of all relatable to everyone in the audience.
See, the issue lies within the severe lack of diverse representations of people of color, where we are not only the villains and best friends, but the lovers, heroes, and more. The best way to achieve this is to expand our presence in all media. Stop the token casting of a few people of color, and fill the cast to bursting with us. Show the diversity that exists in reality, where we are doctors, lawyers, criminals, geeks, and soldiers. Once we are more present and more accessible in media then there will be more fans rooting for and falling in love with us.
Not liking a character of color or not shipping them isn’t racist. However, fans shouldn’t turn a blind eye to the latent racism, and lack of representation of people of color in media. Nor should they ignore how the problematic nature of the media they consume can directly affect how they react to (love, hate, mourn, etc) characters of color.
Love who you love, ship whomever you want but don’t ever stop questioning and examining media. We ALL should challenge content creators to do more, to do it better, and do it with a more diverse cast of characters to represent EVERYONE in the audience.
Home
Subscribe to: Posts (Atom)